Chef Oya Woodruff, founder of Chef Oya’s the TRAP, an Indianapolis based seafood restaurant, visited Purdue this week and talked about the black experience around food and demonstrated her cooking skills.

Woodruff spoke to an audience of around 20 people at the Black Cultural Center Friday evening about her experience as a chef and on food justice.

Woodruff has made waves in her local community for her philanthropic efforts at running her restaurant.

“Let’s talk about what it means to have a space with no farmers,” Woodruff said. “The restaurant I work in is in the top tenth percentile per capita of the largest food deserts in the country.”

A food desert is an area that lacks affordable access to nutritious foods according to the United States Department of Agriculture. Food deserts are found across the country and undernutrition is a growing problem across many suburbs.

Woodruff says her goal is to introduce new flavors to communities with a lack of variety in their diet.

“Anything that’s going to feed you and offer you nutrition is important,” Woodruff said. “A basic necessity that we all deserve is being able to eat.”

Woodruff talked about the importance of food when it comes to formulating and connecting with one’s culture and ancestors. She discussed the impact of introducing her community to new foods, like seafood as it gave them new perspectives and joy.

“I knew what not having access felt like. I knew that I had to travel at least fifteen minutes to get to a grocery store,” Woodruff said. “I recognize that there’s a need for people to be exposed to these different flavors and cultures and we do our best to serve our community.”

Woodruff’s restaurant was popularized for the programs to serve the local community.

“We have two programs. One of them is what we call seafood shedding where we bring someone who’s sick or mourning a week’s worth of food and hope it works for them at the moment,” Woodruff said.

“We also have a program(called) at the window where if anyone from the community is hungry, they can come and we’ll give them some food free of charge.”

Audience members listening to the conversation were leftmore inspired by Woodruff’s stories. Woodruff went at length about her experience as a black woman with food and how the food culture she grew up with differed from others. One example she gave was being surprised when her friends thought it was weird that she ate fish with spaghetti on Fridays, something which is common among many black families.

“I was really impressed with the way she said that joy is not optional,” said Jason Campbell, graduate student at the Polytechnic Institute.“It’s clear that the chef has made it her everyday to do what she wants to do and it’s clearly working well for her.”

She emphasized on the importance of giving back to the community through food at her cooking demonstration Saturday afternoon at Marriott Hall.

“We operate (by) trying to make certain that we take care of the people that care of us and our neighborhood that we operate in.” Woodruff said.

“Trap stands for restoring food access to the people and food access to me is making sure that we are offering (and being a part of) our community” she said when asked why she chose the acronym ‘trap’ as the name of her Trap butter, a delicious butter sauce that she uses at her restaurant.

Her menu mainly consists of Trap-Buttered seafood trays and boils consisting of shrimp, crab legs, lobster tails, salmon, corn, and broccoli. However she said she is no ‘one trick pony’ and enjoys baking and experimenting with different kinds of black food.

“I love doing black food and when I say black food I don’t just mean soul food because black food encompasses a lot of things,” she said.

It’s important for African Americans to still have their own culture and style of cooking and for it to still remain untouched and classic, she said.

“Why (did) a period of imperialism really permeate (to) every single aspect of society,” she said. “My goal is to always fight back in whatever way that I can and make sure that we are able to have our voices and have our food ways and they’ll be just as classic and delicious.”

Her advice to aspiring black chefs is to “be open to learning.”

“You are going to learn wonderful techniques and things that are going to push you to where you are,” she said. “I think it’s important to just always be coachable.” 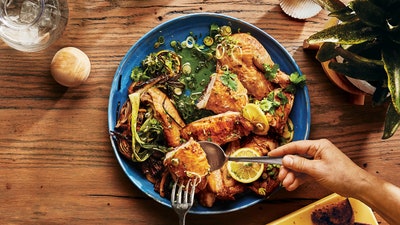